The ambition is breathtaking. Now Corbyn needs to seize the time he has left to confront the politics of despair. Labour’s electrifying manifesto should jolt this election into life 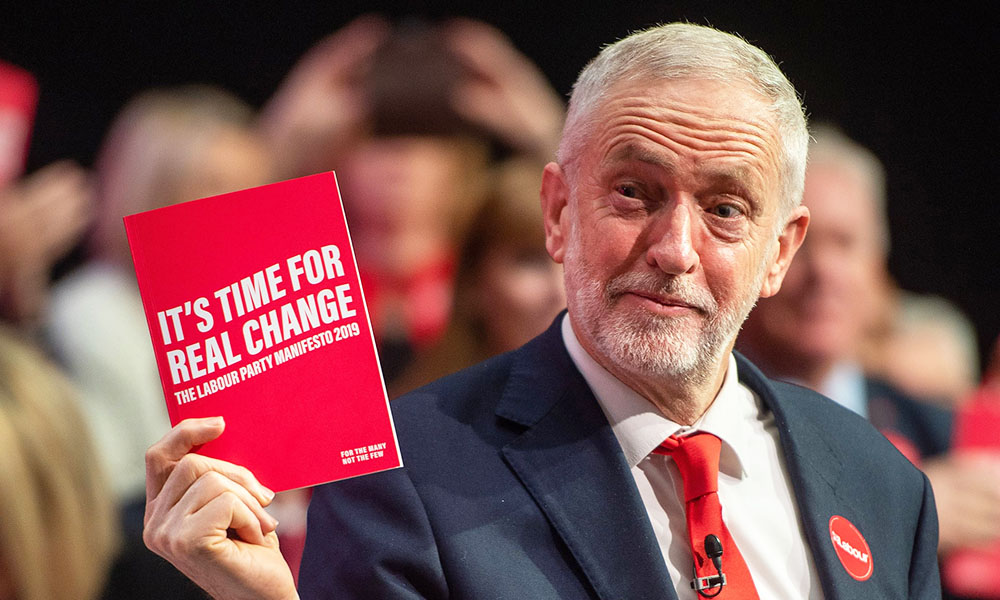 If Jeremy Corbyn’s attacks on the billionaires, bankers and out-of-control multinationals are called the politics of envy, he’s not out of step with voters

Here it is, a great cornucopia to lift this miserable election to a higher plane. Labour’s manifesto offers a vision of a country that can begin to put to rights the dilapidation and dysfunction that has been the deliberate policy of the past decade. Repair, restoration and reinvestment is the first task, but even that dismal work requires gigantic ambition. Labour goes right to the heart of longstanding fault lines in how the country is run, and for whom.

The nation’s problems are clear to all, as poll after poll shows people know exactly what needs to be done. They know that housing is the key economic malfunction that has upended the life chances of those under 40. They know climate breakdown will engulf their children and grandchildren without immediate radical action, and it has shot high up in public concerns. This manifesto makes practical sense of green necessity, turning housing need and decarbonisation into an industrial strategy with a million good jobs.

Labour is up against the politics of despair. Nothing works, nothing can be done; grumble and lump it. The Hansard Society’s latest survey finds that 56% of people think the country is in decline. They’re right about the precipitous downward slide in the economy, in living standards, in public services and in the quality of life people see all around them. They think Britain’s reputation has plummeted in the world. They’re not wrong. The election is framed today as a battle between ambition or managed decline.

Unfortunately, 66% also think most big issues today don’t have clear solutions. That’s the pessimism the Conservatives use to poison the well of public policy. Don’t hope for anything better – problems can never be solved, nor even much ameliorated. That’s how they have got away with such ravaging cuts over the past near-decade, spreading the gloom of inevitability. But even they know they have reached the end of that line, as focus groups tell them people won’t put up with it any more, so Johnson gives the most-noticed public services a bit more. Nothing that begins to repair the damage done, but enough to give the game away that austerity was always their choice, not necessity.

If Labour’s manifesto is under attack as too much, too extravagant, then put each pledge into context. Take that promise to build at least 150,000 more council and housing association homes a year. The two Harolds, first Macmillan then Wilson, both reached more than 300,000 new homes a year, many of which were council-owned, in an era when the country was by many multiples less wealthy – but paid higher taxes. How has that become impossible now? It’s a matter of will to do it, that’s all – but that’s everything. Can Labour summon up that will in enough voters to keep Conservative defeatism out? There’s nothing so radical about the popular taking back of rail, mail, water and energy when privatisation of natural monopolies has proved an ideologically driven blunder. Nor is a windfall on oil companies to pay for green industries new: New Labour began with an instant £5bn windfall on privatised utilities, which was of course called Marxist expropriation at the time.

Real changes for the many not just for a few


How frightening is that plan to take 1% of shares a year for 10 years from large companies to give some control to their workers, with up to a £500 dividend? It looks a lot less radical when you consider this: the Investment Association, a City trade body, recommends that executives be paid via a share scheme that does not exceed 10% of the issued shares in any rolling 10-year period. Why one rule for workers and another for CEOs? Labour’s levy on excessive pay is long overdue.

If Jeremy Corbyn’s attacks on the billionaires, bankers and out-of-control multinationals are called the politics of envy, he’s not out of step with voters. The Hansard survey finds 63% think Britain’s system of government is

“rigged to advantage the rich and powerful”

– and they’re right. All anyone need do is look at the lying braggart Boris Johnson or his equally entitled and callow Etonian predecessor, David Cameron, with his “because I thought I’d be good at it” prime ministership, to know who rules (badly) and why. Corbyn today was back in his stride: good at the details, bounding with energy that was lacking in that dismal debate. At last the climate emergency – only 11 years left before risking lethal tipping points – is put centre stage. Labour’s green industrial investment in electrifying cars is essential – but this manifesto must electrify this desperate campaign.

Can Labour break through the wall of sound denouncing this as Venezuelan politics on stilts? It’s not. Read it with an open mind. Page after page shows that something better can be done.

Has Corbyn, with his frontbench, got the heft to lift it above the bellowing lies of their opponents? It was shocking that the Conservative campaign put out a fake Labour manifesto, utterly unabashed by official protests at its fake factcheck site. The great question is whether Corbyn can seize these last three weeks and breathe excitement into enough voters with this dazzling array of policies. The ambition is breathtaking. It should frighten Tory complacency, and it deserves to jolt this election into life.