2 People Killed in a 'Terror Incident' Near London Bridge

2 People Killed in a 'Terror Incident' Near London Bridge

London Bridge attack suspect 'had links to Islamist terror groups'. Two people were killed and three more were injured in a terrorist attack near London Bridge on Friday, police have confirmed. The suspect was wrestled to the ground by passersby and shot dead by officers. 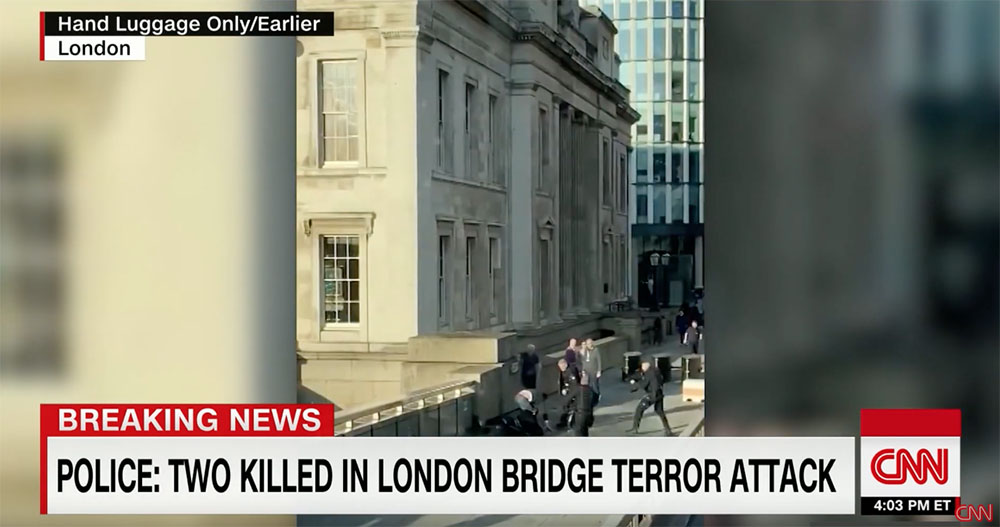 A man with a hoax device strapped to him has been shot dead by police officers. Video filmed at the scene by an eyewitness showed a man being wrestled to the ground by members of the public on the northern end of the bridge, shortly after police were called to an incident at a nearby premises.

"Two of those injured in this attack in the London Bridge area have tragically lost their lives,"

the Metropolitan Police Commissioner Cressida Dick said in a news conference on Friday.

Officers have not commented further on the motive for the attack near London Bridge, but Assistant Commissioner Neil Basu told a press conference on Friday afternoon that they were enhancing patrols in the area and across the city in response.

The incident comes more than two years after eight people were killed and dozens more wounded in a terror attack at London Bridge. 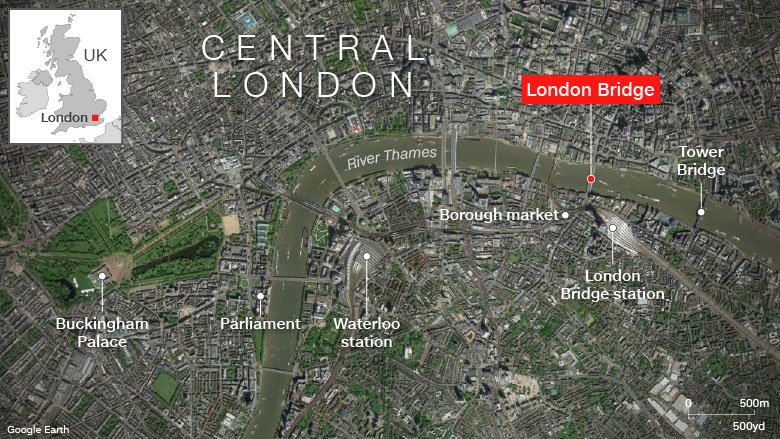 Lloyd Griffiths, 35, was on a bus on the bridge on Friday as the attack unfolded. He told CNN he saw an altercation as several people tried to wrestle a man with a knife before police intervened.

"Then police ran over with guns, screaming," before shooting the man, Griffiths added. Multiple emergency vehicles quickly arrived on the scene, with many people evacuated from the area.

Dick said the attack started at Fishmonger's Hall, a historic building on the north side of the bridge.

London mayor Sadiq Khan praised the "breathtaking heroism" of "ordinary Londoners" who risked their lives to intervene in the incident. "We are resolute, we stand united in the face of terrorism and we will not allow anybody to divide us," Khan said in a press conference.

British Prime Minister Boris Johnson added that anyone involved in the attack "will be hunted down and will be brought to justice." He added that "to the best of our knowledge the incident has been contained." President Donald Trump has been briefed on the incident and is monitoring the situation, Deputy White House Press Secretary Judd Deere said in a statement.

Scenes of panic at a busy London hub

Witnesses described scenes of panic as swarms of Londoners were rushed away from the bridge by police, while major buildings surrounding the area including the Shard skyscraper were put into lockdown.

Simon Shorey was eating with his family in a burger restaurant when the incident occurred. "The whole restaurant had people under their tables and sat down on the floor," he told CNN. He says people were trying to keep updated with the latest developments on their phones and the atmosphere started to calm down. 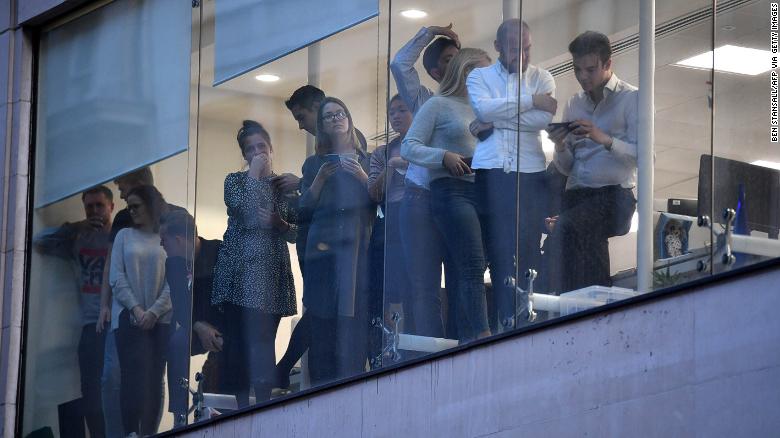 "There were people running down the street just outside the windows of the restaurant. They weren't screaming at that time, but people were running back down and after a few more minutes we were told 'everyone out, everyone out.'"


Olivia Bizot, who was also present at the Boston marathon bombing in 2013, added: "I was coming towards the bridge on my bike and I heard explosions. I didn't really assume it was gunshots at first."

"All of sudden all these people came running like a flood of people... A few years ago I was at the Boston marathon bombings and I was at the finish line just before it occurred and it was the same thing -- everyone running, panic on their faces," 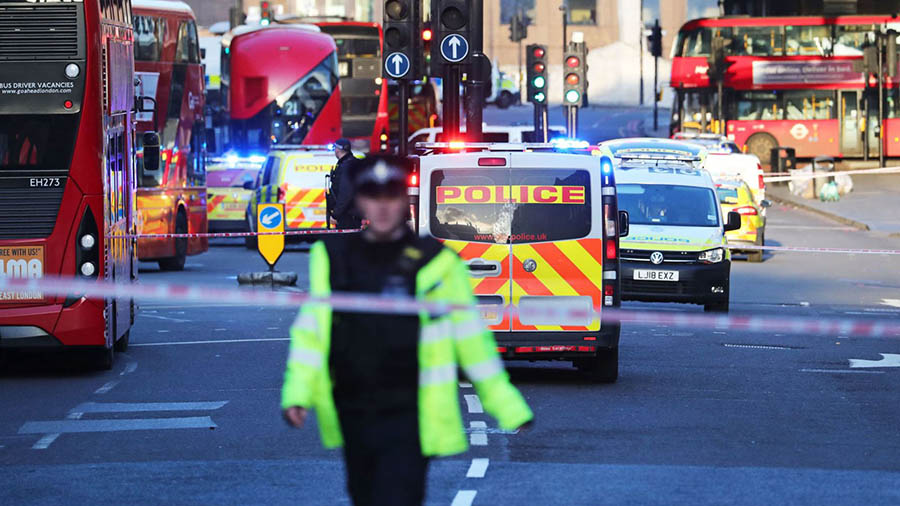 A white lorry was seen stationary across multiple lanes of traffic in the middle of the bridge, which armed police approached after the incident. It was unclear whether the vehicle is related to the attack.

Other videos from the scene showed people evacuating pubs near the bridge. London Bridge is a busy area of the city which houses several restaurants, bars and businesses and is near Borough Market. It was also Black Friday, one of the busiest shopping days of the year.

Jinnat Ui Hasan told CNN he was in a meeting in a building near the incident when he heard "more than five" gunshots.

Elsewhere, Stevie Beer, 26, told CNN that her place of work which overlooks the bridge was in lockdown Friday afternoon.

"A colleague out for lunch messaged to say there had been an incident on London Bridge and he was unable to cross back over the river. I went straight to the window and saw hundreds of people running off the bridge down Tooley Street,"


"People looked so panicked. It was haunting. There were at least half a dozen police cars and halted buses. Our building is now on lock down but we've not been given any concrete information,"

she added soon after the incident.

Re: 2 People Killed in a 'Terror Incident' Near London Bridge

London Bridge is slowly getting back to normal

Residents of London Bridge start picking up the pieces after second attack in two years. But some residents are wondering what is the new normal.

"Some have said they want to move away from here and not live here which is quite sad to hear,"


"People are feeling what they felt in 2017 so there is a sense of deja vu and, really, they don’t really know what to say- I mean what do they say? People say it doesn’t happen twice in the same area and it has and they just think it’s something unbelievable that’s happened and the community is under attack again".

Closer together
For some traders in the famous Borough Market, it’s business as usual, with a sense of camaraderie.

"It’s funny it seems to bring a lot of people together, it’s like a family sort of thing, people seem to get closer and stand together again",

The market may have customers but it could be some time before London Bridge is fully open The police cordon is expected to be in place for some time as the investigation continues, meanwhile there will be extra patrols around the Londo Bridge Area and across the capital.

Community support
As well as more officers on the streets, the local community is rallying around to support anyone who might be affected by this latest act of terrorism.

"We are able to receive people and we always have people here ready to talk to people and pray with people," says Andrew Dunn of Southwark Cathedral. "So helping the process of healing really to take place but when a wound has been reopened, that’s quite a painful thing. I’m also very conscious of the families of the 8 who died 2 and a half years ago - you know what must they be going through?"

There’s remarkable stoicism amongst residents - who have lived through not one but two terrorist incidents - and of course, you can’t put a time frame people’s ability to heal.