Their decision to “step back” from the Royal Family is an indictment of the British press.

The unofficial motto of the Queen Mother was simple: “Never complain, never explain.” It was an attitude influenced by her aristocratic upbringing—in which a “stiff upper lip” was highly prized—and the sense that the Royal Family must retain its mystery to survive. 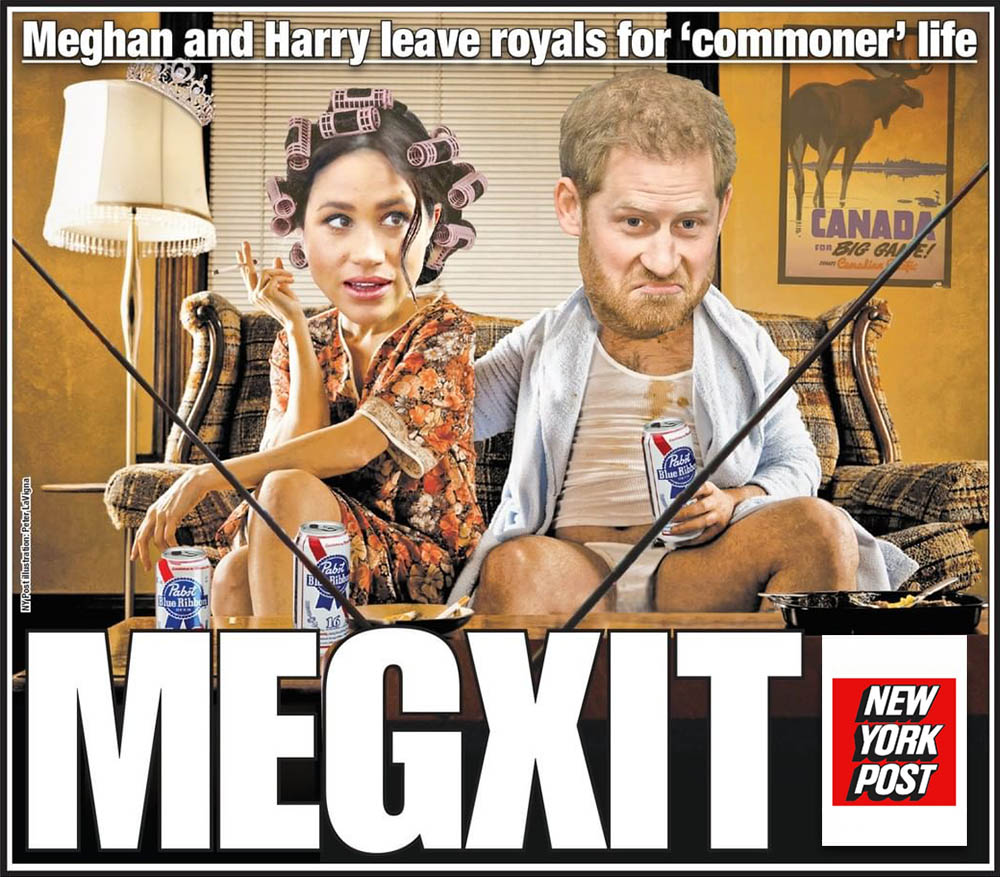 It is a motto that Prince Harry and his wife, Meghan Markle, have comprehensively rejected. The couple’s announcement that they will “step back” as senior members of the Royal Family is a significant moment in the centuries-old soap opera of the British monarchy. Harry and Meghan have come to symbolize a new type of royal: unashamedly political, emotionally open, socially conscious. As a mixed-race woman and a feminist, Meghan has become an icon (and a hate figure). As an American, she has exported the Windsor brand back to a continent that once took a rather dim view of hereditary rulers. And like another American divorcée, Wallis Simpson, she has emboldened her royal husband to break away from his family.

The couple have repeatedly shown their willingness to complain, and to explain. The 12-year-old boy once told to walk behind his mother’s coffin, showing no emotion, has grown up into a man determined to talk about his mental-health struggles. Markle has been similarly honest about the difficult transition to royal wife and mother. “Not many people have asked if I’m okay,” she told a reporter for the British broadcaster ITV in October, fighting back tears.

Harry and Meghan have departed from royal protocol by laying the blame for this unhappiness squarely at the door of the media. The novelist Hilary Mantel once compared the Royal Family to pandas. There is one big difference, though: Zoos are nice to pandas. Parts of the British press have often taken a baiting tone with the royals, accusing them of being lazy drifters while also making it impossible for them to hold down normal jobs. They are too fat, too thin, too “waity,” too “pushy,” too opinionated, too everything.

Harry has called out this attitude more since meeting and marrying Markle—a woman with a successful career, money and opinions of her own.

Soon after their relationship became public in 2016, he released a statement criticizing “the racial undertones of comment pieces” as well as the “outright sexism and racism of social-media trolls.” He has repeatedly made it clear that the press harassment of Markle has stirred up memories of his mother, Diana, who was being pursued by paparazzi when her car crashed in a Paris underpass in August 1997. “One of the hardest things to come to terms with is the fact that the people that chased her into the tunnel were the same people that were taking photographs of her while she was still dying on the back seat of the car,” he told a BBC documentary on the 20th anniversary of her death.

In October, when Meghan launched a lawsuit against a British newspaper for publishing a letter she wrote to her estranged father, Harry supported the move. “I’ve seen what happens when someone I love is commoditised to the point that they are no longer treated or seen as a real person,” he said in a statement. “I lost my mother and now I watch my wife falling victim to the same powerful forces.”

Accordingly, the announcement about stepping back was accompanied by the launch of a new website, SussexRoyals.com, with a section dedicated to the media. Harry and Meghan will no longer participate in the “royal rota” system, in which one media outlet covers an event and distributes footage and photographs to other organizations. Instead, they will work with “grassroots media organisations and young, up-and-coming journalists,” and “provide access to credible media outlets focused on objective news reporting.” In other words … Harry and Meghan to Royal Correspondents: Drop Dead.

The Royal Family was surprised and “disappointed” by the announcement, which does not seem to have been cleared in advance.

But really, it cannot have come as much of a shock. Harry and Meghan have been edging toward the royal exit door for months. Megxit was merely a matter of time. They have only just returned from six weeks with their baby son, Archie, in a private house on Vancouver Island in Canada, a location that stayed secret until almost the end of their stay. They missed the traditional royal Christmas at Sandringham and undertook no public engagements in that period. It was a remarkable leave of absence from life in the royal zoo.

Previously, no royal has ever taken on the press quite so directly, much though they might have wanted to. In 2005, Harry’s father, Prince Charles, was caught on a microphone complaining about the journalists at a photo-call on their family skiing trip. “I hate these people,” he said. The photo-call was the price of the media leaving the prince and his sons alone for the rest of their holiday. Similar quid pro quos are still in operation: limited, controlled media access in exchange for some peace.

Harry is unwilling to accept this bargain. When Archie was born, there was no announcement that Meghan had gone into labor, and no photoshoot on the hospital steps. (The arrival of his older brother’s children was accompanied by a media scrum, and William struggling to fit a car seat in full glare of the world’s press.) Harry has now gone further. By withdrawing from the royal rota, Harry and Meghan are pursuing a media strategy closer to Hollywood A-listers than the grin-and-bear-it universalism associated with the ruling family. The price of access will now be good behavior—or as they call it, “objective news reporting.” No more vague rumors, no more cruel comment pieces, if you want a ringside seat at the Harry and Meghan show.

The most noteworthy part of the statement was the couple’s wish to become “financially independent.”

The rationale for press scrutiny of the Royal Family has always been: We pay for them, so we own them. Harry currently receives an income from his father’s estates in Cornwall, and has an estimated £30 million inheritance from his mother. Giving any of that up would be truly radical, and so would renouncing his title.

The evolution of the Royal Family has always reflected changes in British society, as every season of The Crown proves. In two generations, “The Firm” has gone from forbidding Princess Margaret to marry a divorcé to embracing one—Markle—into its fold without fuss. This latest move reveals another generational shift. Like many other Millennials, Prince Harry is more socially liberal than his elders and more willing to share his emotions on social media. (Also like many other Millennials, he was only able to afford a house thanks to money he got from his parents.) He represents the end of the stiff upper lip as the royals’ default mode, forcing Britons to confront the human cost of their obsession with the monarchy.

Harry has always been a royal rebel: smoking cannabis, partying in Las Vegas, admitting how close he came to a breakdown. With his wife by his side, he may now be making his most significant contribution to the Royal Family—by walking away from it.
Вернуться к началу
1 сообщение • Страница 1 из 1